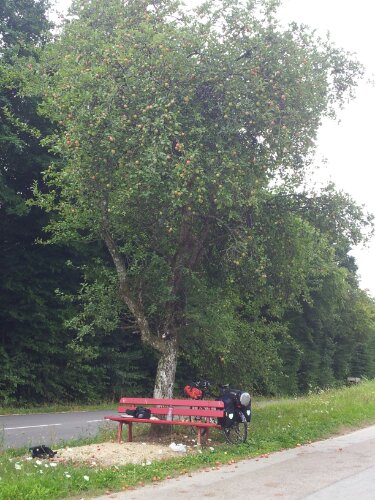 There is something quite satisfying about finding a ripe juicy apple, which just a few moments ago was released, fully nourished, from the mother tree. Earlier this week, I was fortunate enough to find an apple tree shedding fresh apples, which provided both shelter from the sun and rare shot of fresh fruit into my diet.  The floor around the tree was littered with less than appetizing remains of previously dispatched apples, half eaten by caterpillar and other such insects.  It was only as I sat and ate lunch that I heard the pitter patter of fresh siblings touch down around me, scrumptious.

Which got me thinking, after my last post about ‘cycling on’ to find what I’m looking for, I have become very specific about exactly what it is, I want to find.  For instance, I have stopped at many benches to make coffee and sandwiches and on the odd occasion I have happened upon a picnic table.  Picnic tables are actually much more comfortable and better accommodate my requirements; to make lunch and sometimes type updates to Facebook or cyclehacker.com.  Beyond choosing what to eat for lunch, stopping for lunch and finding somewhere to sleep for the night, are the two most important choices of the day.  I know, it’s a hard life. 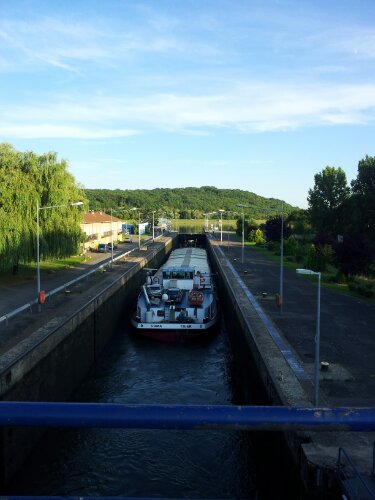 Along the Moselle between Metz and Nancy

When travelling from Metz to Nancy, after picking up some delicious chocolate pastries and fresh bread, I decided the best way to enhance my enjoyment of these ingredients, was to cycle on until I found a picnic table.  It was also my intention to finish last weeks blog post, so shade from the sun would be an added bonus.  Ten hours since my last proper meal, with only a few mouthfuls of peanuts to stave of the insatiable hunger building with every pedal stroke, I went in search of a picnic table.

I had been spoilt for choice in Luxembourg, benches were scarce, but picnic tables a plenty.  Now back in France however, I could barely cycle without bumping into a bench and a picnic table was nowhere to be found.  Village after village, bench after bench, I past through increasingly frustrated by the absence of the illusive picnic table.

Nomany, was the first major town named on my map, a good thirty miles from the Boulangerie that inspired my quest to enjoy breakfast in style.  I had no intention of cycling all that way before eating breakfast and as it became closer, the temptation to stop, accept less than I wanted and cave into the instant gratification of fresh bread and chocolate pastries, grew.

It had now become a matter of principle, the universes way of testing my resolve to follow through with the commitment I had made.  It struck me that if I was not strong enough to resist gratifying my hunger, the message sent back to the universe, would be one of solemn weakness.  A person willing to accept less, to give up their desires and satisfy short term urges, must surely be destined for a life of never really getting what they want.

I was then delighted and relieved when I did eventually reach Nomany, where, like a fresh, juicy fallen apple, the only picnic bench I saw that day. 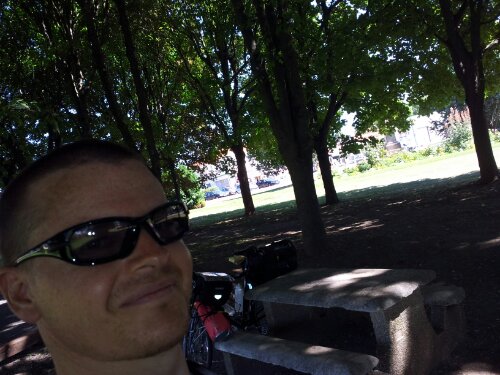 Breakfast missed, to be replaced by an unusually rewarding lunch and a firm signal of intent to the universe.

← Can One Solution Solve All Problems? Sunflowers To Lake Lausanne And A Wonderful Act Of Kindness In Between →