Can One Solution Solve All Problems? 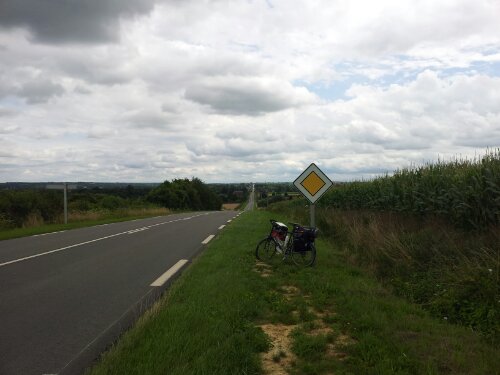 I have noticed during my time on the road so far that one solution appears to solve all of my basic problems; hunger, thirst, shelter and connection with others, can all be resolved by simply cycling on until I find what I’m looking for.  Cycling on is very specific to my circumstances at present and would be of limited use if, for instance, applied when trying to chat someone up in a bar.  However the essence could be applied more generally as, ‘to keep going’ until you get what you want:  Stay in the bar,  find someone less attractive, depending of course, on what it is that you want.

Nothing revolutionary here, it’s a simple principle that through the act of cycling and living on the road, has become absolutey clear.  The fact is, I don’t have the same options that were previously afforded by a good job and a permenant roof over my head.  The transient nature of my existance means that my needs and wants occupy my full attention until they are satisfied, without the distractions of perminance to get in the way.

Keep going, with absolute focus, until you get what you want. So simple, yet so powerful.

Since the last installment I have been more aware of how this simple formula effects the course of my days and in turn the weeks and months ahead.

After breakfast, Tony sent me off in the right direction with a handful of power bars to visit my Great, Great Grandfathers grave in Ieper.  Ieper is a beautiful town with a history mared in trajedy, it was entirely destroyed during the first world war, when thousands of lives were lost.  It was sometime either during the destruction of Ieper or in the continuation battles following, that my Great, Great Grandfather lost his life.  The town was rebuilt using the original arcitechtural drawings and there are many memorial grounds featured in the town and surrounding areas.  I visited the Menningate Memorial near the centre of Ieper and my Great, Great Grandfathers grave, which is situated a few kilometers from the centre of town, to pay my respects.  A moving experience, impossibe to imagine justification for such loss of life and suffering. 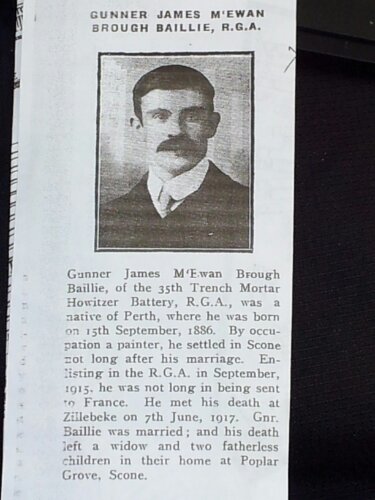 Leaving the outskirts of Ieper the next morning, I picked up the river Deule and began on what turned into a mamouth river and canal side adventure, first into Lille. 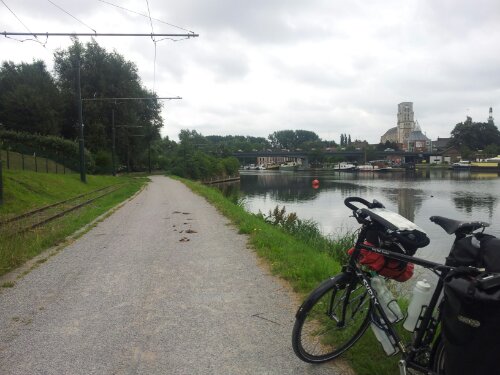 Then out the otherside towards Valenciennes. 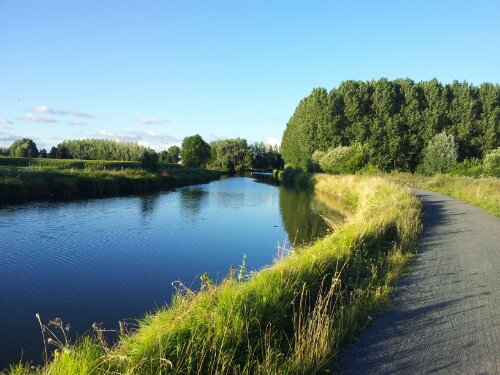 I was enjoying the scenery so much I committed to cycle along the waters edge until I could cycle no more.  I passed many beautiful places to stop and set up camp but chose to continue to see what else the path had to offer. 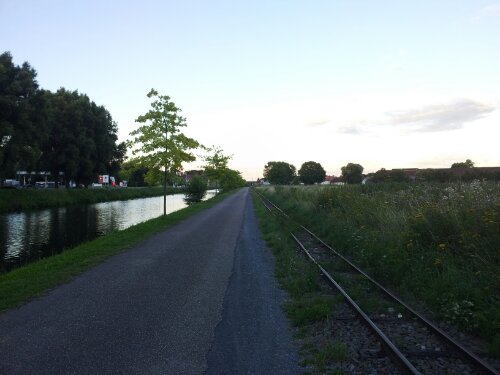 As night started to draw in, the path came to an end and ejected me out into a very unsavoury suburb of Valenciennes, think: Schittsville.  As I breached the boudaries of the regional map in Lille, I switched to a less detailed country wide map, which is next to useless unless you are driving a car on the main artery routes.  I was definitely in Schittsville, I just didn’t know where it was on my map, or in which direction to head, in order to escape.

I had already cycled sixty five miles and cycling on to find a place to sleep seemed like the only choice. 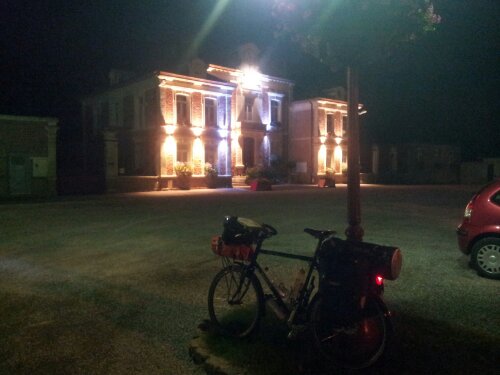 In the end, after reaching Le Quesnoy at twelve thirty in the morning, 15 miles further on, I followed signs to a campsite and quietly set up camp.  It was one thirty when my head finally hit the sleeping mat.  In the daylight the following day I reassessed some of the potential camping spots I chose not to use and could clearly see that if I had been braver and/ or bolder, I could have camped for free.

The next couple of days were spent mostly climbing hills as I travelled east back across the boarder with Belgium, good training for the alps, but utterly exhausting. The first night was spent just outside Chimay, I was determined to find a suitable spot earlier in the evening to avoid another helpless, blind search reserved only for the braver and bolder.  An unused field sheltered by a hedge row became the perfect place to indulge my hunger with the multi-course french baguette, first smothered with a mackrel and tomato sauce, then Nuttella (cheap local supermarket alternative), washed down with a strong black coffee, hhhhmmmm. 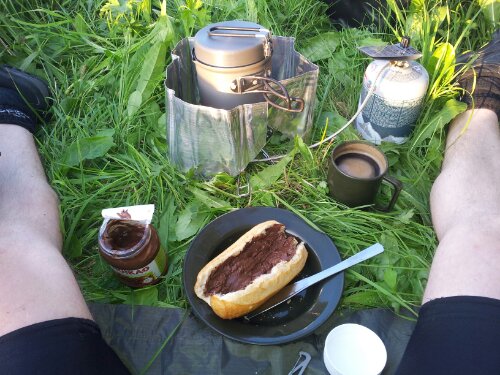 It was during a routine fuel stop in Paliseul, the next day, that I was picked up by a lady named Chris. Whom, after observing my use of the town square bench as, kitchen, lounge and internet cafe, determined I looked like I might need somewhere to sleep for the night.  YES, I thought, the homeless man look is coming along nicely! 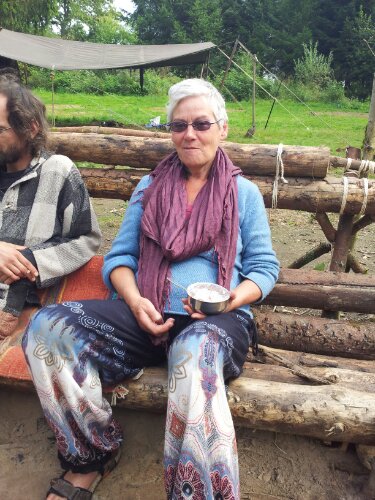 Chris explained, there was a retreat in the woods nearby where I would be welcome to put up my tent for free and I would also be fed by an Indian chap who cooks all day, if I could contribute 10 Euros towards his Ashram in Dehli.  I didn’t immediately accept, the words ’10 Euros’ temporarily deafened me from hearing the true nature of this kind gesture.

It was only after I had converted my temporary home back into a bench and started on my way toward Luxembourg, that I recognised the Irony in what had just happened.  I’m sitting on a bench using the internet to find somewhere to stay for the night, Chris walks up and offers me somewhere to stay and I effectively tell her, no, I’m alright thanks.  Idiot sprung to mind and I about turned and made my way toward the forest.

When I arrived, I was warmly welcomed by a group of diverse individuals, each with interesting stories to tell.  It turned out I had entered an naturist retreat which is organised annually and runs for the duration of August, you can find out more about it on their website, www.indygo.be.  The emphasis is on living in harmony with nature and everyone who passes through, contributes to the running of the camp, in whatever way they can.

Once settled in, I entered into the spirit of things and headed to the river for an early evening bath, which was very refreshing in a bloody freezing kind of way. 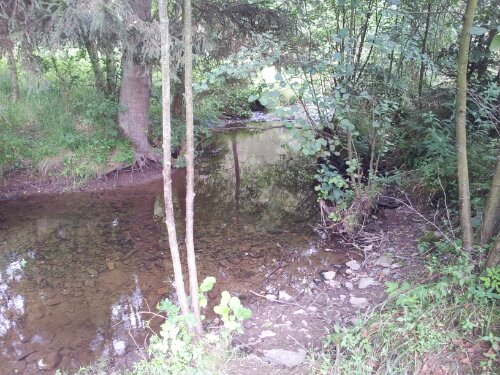 On returning, I was summonds to the dining area by Radi, to enjoy chai tea followed by rice and chickpea curry eaten the traditional way, by hand. 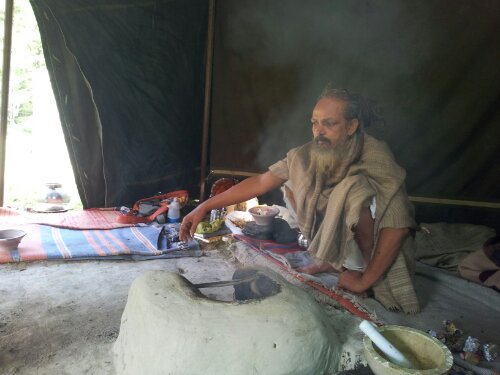 Radi travels from his Ashram near Dehli each year to visit the retreat and promote the benefits of natural living, he is also the resident chef and jukebox.  I talked with Radi for a while about what lay ahead in India, as the others joined around and the Hindi singing began, I started to feel quite sleepy.

It was made clear, I was welcome to stay for as long as I wanted and the next morning although I was keen to keep moving, a part of me also wanted to stay, relax and learn from the multi-skilled guests.  It was lunchtime when I managed to cycle on, declining the opportunity to play volley ball or a class in Yoga but after a few poorly aimed shots with a longbow, the road nagged in my ear. 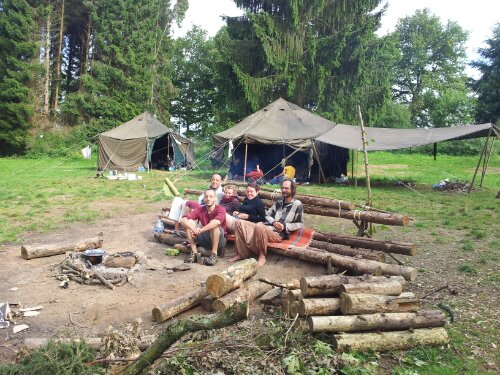 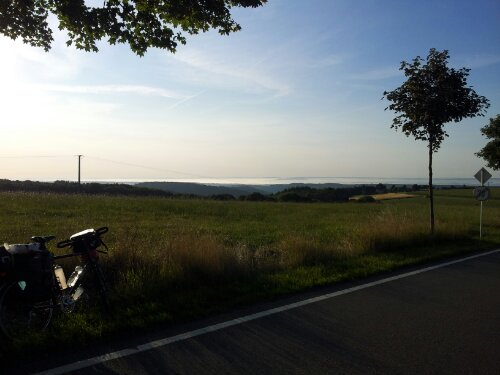 A beautiful country, with rolling hills and forest lined roads lush with vegetation, left me ready for everything it had to offer.  It seemed very quiet working my way to Luxembourg City, I imagined everyone was in doors counting their tax free millions, it was only on arrival at the tourist information desk I was informed that, 14th August is a national holiday in Luxembourg.  Without food in the coffers and only prime tourist locations touting their produce, I took some pictures and made my way to France. 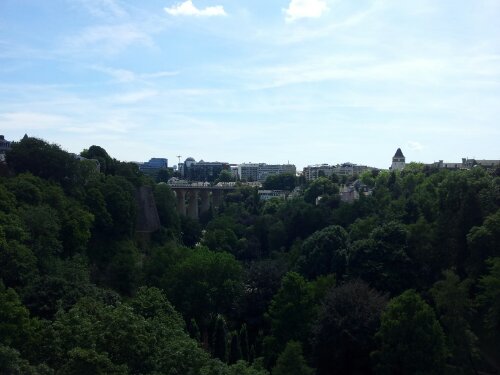 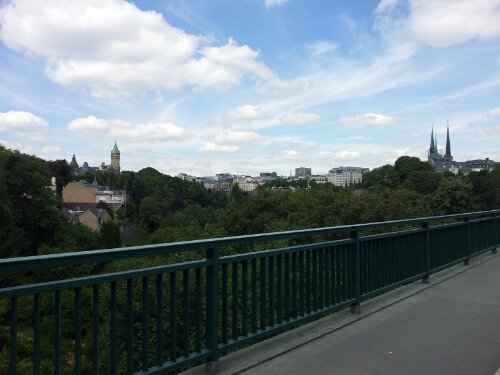 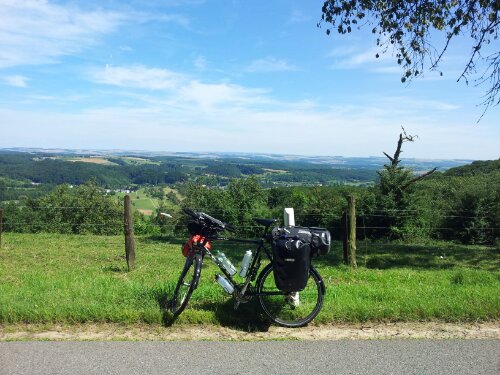 I had originally intended to visit Saar-Brucken in Germany, however the time spent navigating cities has so far yielded little rewards, the open road is where bicycle touring fulfills the senses.

Entering back into France felt like returning home to see an old friend, the familiar signs, language and culture open the mind to look beyond the surface and begin to understand a differnt way of life.

It’s fortunate as I head toward Mont Blanc, all that I need can be found by simply cycling on, although the alps will surely test my resolve to keep going, until I get what I want….

← What Was I Thinking? Searching For Falling Apples →