Slovenia – Beauty and the Beast

If Slovenia was a women, she would be Emily Ratajkowski; stunningly beautiful, playful, naturally entertaining, mesmerising to watch and to get across her, so to speak, you’ll need to work you arse off one way or another.  After the long flat straights of Italy I was ready for some curves and Emily, sorry, Slovenia has some seriously wonderful curves, up, down, around, every which way you look, just stunning.  Given my circumstances, I would need to ‘get across her’ by literally working my arse off, with blood, sweat and tears, my only chat up.

Like each new country, entering Slovenia was exciting and as one I had not visited before, there was also an extra air of intrigue, to control.  I didn’t want to set off at too fast a pace, too eager to explore, only to find out half way I had not the ability to do her justice.  No, carefully setting off, absorbing the intricate details along the way, I would need every trick in the book to make the other side, with my pride in tact. 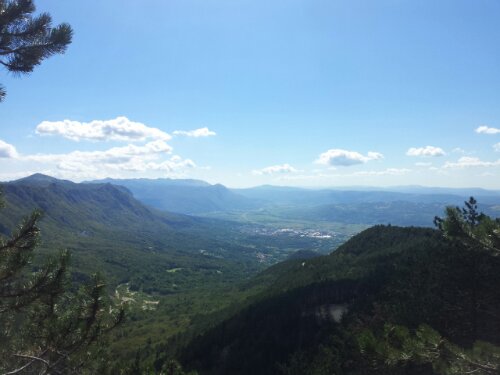 Through ignorance, my original intention was to cross from one side t’other without much thought to what lay between, only the landscape got in the way. Determined to avoid being funnelled into Nova Gorica, the town bordering Gorizia in Italy, I stubbornly made my way to Ajdovščina, taking in the lush, hilly landscape that instantly surrounded me on leaving Italy, I was hooked.

Someone turned the traffic tap off and only a manageable leak wept through, almost apologetic for blotting the otherwise virgin landscape, lightly dotted with buildings of purpose.  I found a very comfortable Hostel, a cafe serving searingly hot, tabasco laced pizza and instantly felt at home in Ajdovščina.  Through the magic of Facebook, Claire and Sarah recommended I visit Lake Bled and although a detour, I felt compelled to explore. 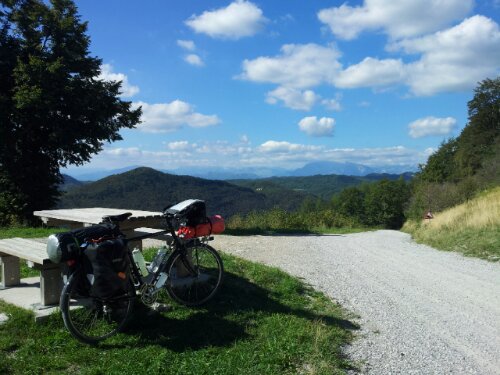 The most direct route took me over Predmeja and I deliberately decided to climb higher to find the top of V. Modrasoveć (1353m), skirting the mouth of Mount Golak (1495m), I made my way down past Čaven (1185m).  The day was exhausting, every day I spend recuperating I pay for the next, there is no real rest, only the delayed punishment of temporary static.  I took homage next to the road on the way to Grahovo after a   wonderful refresh in the lake at Most Na Soć.  It was as pure as the pictures, an outstanding natural cleanse, I removed all trace of fabric whilst talking to a local fisherman whom acknowledged my transient exuberance.

I hoped to find sleep before getting a sweat on, not so.  Slovenia is unforgiving of the lazy and upward I climbed to eventually find rest on a cliff face next to the road, on route to Grahovo, complete with snake. 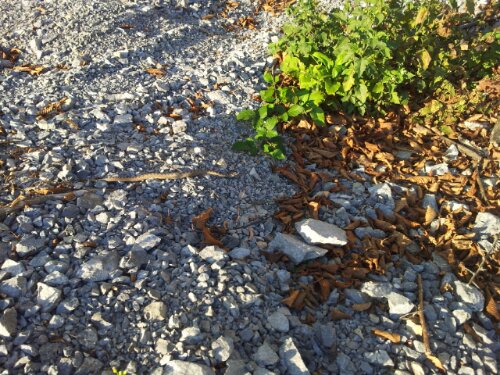 The next day I continued on to find lake Bled, gawd dang, via more freakin mountains, first Petrovo Brdo (803m), then the more impressive Boh. Sedlo (1277m).  I struggle to put these climbs into perspective, Snowdon is 1085m, Scafell Pike is 978m  Ben Nevis, the highest peak in the UK, is 1344m.  They are seriously energy absorbing when walking, never mind when on a bike weighing 35kg. 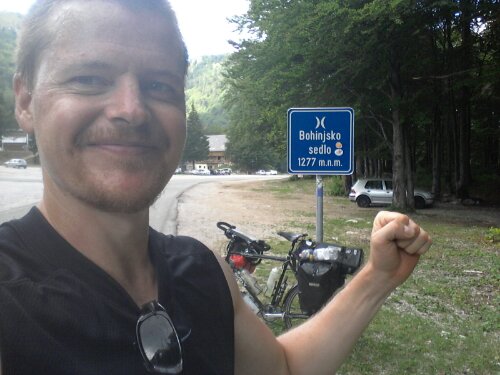 From Boh. Sedlo I think I reached an all time new top speed, but sadly missed it, forgetting to reset the speedo at the top.  I know it’s subjective, but the hairs standing up on my arms and the fear of certain death don’t lie.

Visiting Bohinska was marred with an unfortunate attempt to fill my tyres with air, the petrol station convenience didn’t quite deliver air as expected and instead, with German like efficiency, deflated my rear tyre.  Then ensued a right kerfuffle, reinflating my tyre by hand with the bike fully laden created an oval experience, which I initially associated with the uneven road.  I had almost convinced myself my eyes had become faulty, unable to detect the subtle undulations clearly causing my ride to oscillate, before it dawned on me that my wheel wasn’t round anymore.  It’s only the second time I have inflated a tyre in eighteen months and almost 3800 miles, however the inconvenience of twice in one day, within half an hour, was troubling indeed.  I forgot to mention in the last post my first puncture occurred during a lavatory stop in St Vincent, I actually looked around fully expecting to see Jimmy holding a staple gun and mischievous glint in his eye.  Sadly he was not there and not for the first time I have myself felt deflated by the ever present mirages of loved ones disappearing in front of my eyes.

This is an epic adventure of great physical distance, which is the easy part, the insignificant distance between my ears is where the real challenge takes place.  Then I knew that before I started and the road is merely a metaphor for the journey on which I’ve come.  And what a journey it is, never underestimate what lies within, do go and explore though.  You owe it to yourself and by definition everyone around you will prosper from what you find. 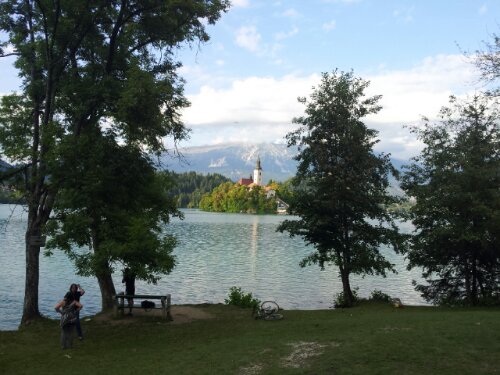 Bled is beautiful, but like most destinations, not a patch on getting there.  A restless night ‘sleeping’ next to a waterfall and I was up before dawn and on my way to Ljubljana, but didn’t stop even to take a picture.  Onward, over the hills to Litija where I joined the River Sava to enjoy some moderately flat miles, mesmerised by the scenery, finally feeling rewarded for the great mental distance covered during a very hilly week. 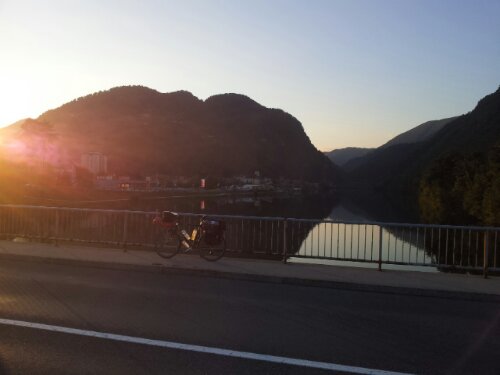 I patted myself on the back when I resisted the temptation of a fixed abode for the night beckoning me in Sevnica, to the woods for free?  Everything has a price.  There was no check in as I passed the overgrown crest down toward an almost dry river bed, only the sound of harmless birds greeted my ears from the trees above.  The sun was setting and I wasted no time setting up the tent, de-robing and washing the film of daytime pursuits from my skin.  With the absence of a light switch noted, it was dark before the soap was off and fumbling around to find my tooth brush I became more aware of the other guests lodging with me for the night. 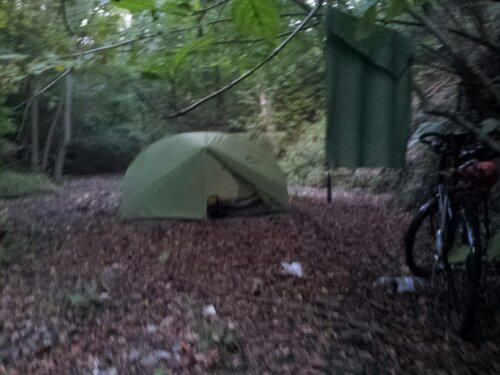 It was then pitch dark, not my hand could be seen in front my face, suddenly from the steep, tree lined banks came an object travelling at speed, leaving commotion in its wake, it stopped on a six pence six or seven meters away, with an undiscernable grunt.  What the f**k, I reasoned it must be a goat or perhaps at worse a wild boar, in any case, humans are too much of a risk for most animals to encounter.  Now motionless and silent, I could almost sense the thoughts of the creature weighing me up and felt continuing with the task of brushing my teeth, was the only logical response.  I couldn’t see it, ignorance is bliss and I expected the creature to continue on it’s way, in fear.

Well, the ‘click’ from the cap of my toothpaste broke the silence and out of the darkness blasted an almighty screech that wouldn’t have been out of place in one of the fight scenes in Alien.  Frozen to the spot, shell shocked, wear just my pants, armed only with a toothbrush and tube of toothpaste, bracing myself for impact from the invisible noise barrier consuming my attention, I touched cloth.  In an instant that seemed to last an hour, the presence of the beast cloaked me, then screeching wildly at everything, it shuttled off in the opposite direction.  Holy f**k sticks, what the fook was that?  Images of wolves, Tasmanian devils, big fecking dangerous cats raced through my mind, and I didn’t feel much like brushing my teeth anymore.  What was the point, who would care if my mutilated corpse was found with the remains of chocolate coated biscuits in my teeth.

Bump, my heart was still working, that’s a bonus, I thought – still alive.  Okay, time for bed, nice, nothing to worry about tonight, nope not at all.  In my heightened state of alertness, I became aware of the vast array of wildlife mooching about around my tent, whilst trying to remember to breath and beat my heart.  The unconscious bodily functions normally operating outside of awareness needed gentle reminders to continue.

After eighty four miles I wasn’t that tired anyway, who needs sleep when you can just ly down rigid with fear, bracing for an attack from all directions.  A small price to pay for a night in the woods.

I found out from Fat Dan the next day that Slovenia is home to some 700 Brown Bears, along with Wolves, Lynx’s, and Wildcats. 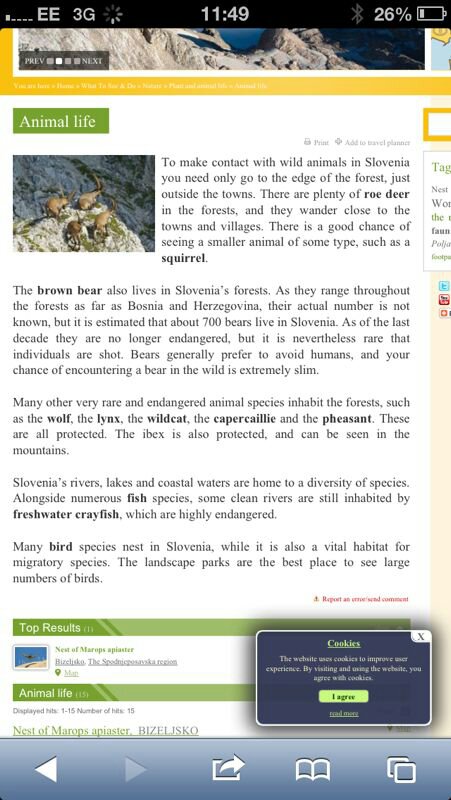 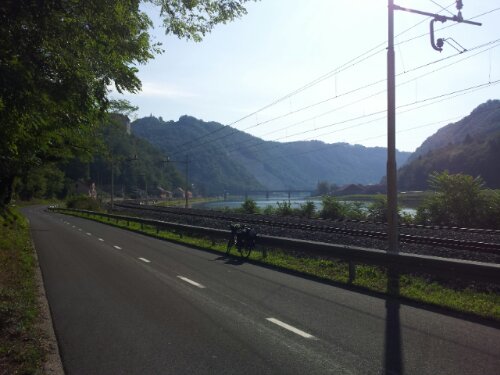 Slovenia, beauty and the beast(s) behind me, I write from the safety of a hostel in the brown bear free capital of Croatia, Zagreb, wondering what’s coming next…….

← Racing The Rain, Riding The River Po and Partying Moldavian Stylie The Journey So Far, A Week In Zagreb And An Incredible Meeting of Chance? →