The Journey So Far, A Week In Zagreb And An Incredible Meeting of Chance? 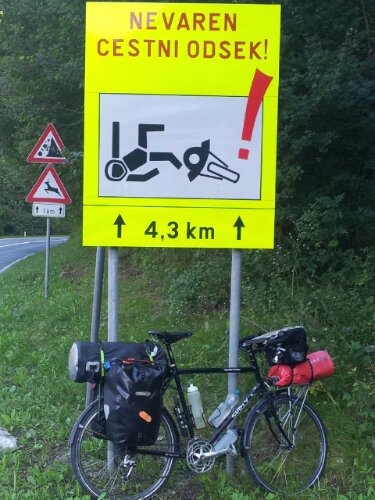 I thought it would be useful to look back over the journey so far by plotting some of the landmarks reached using Google Maps:

A Week In Zagreb

Arriving in to Zagreb, Croatia was much like arriving into every city I’ve reached so far, a mixture of intrigue and frustration.  Cities offer a feast to the eyes and conundrum to the brain, resulting in a kind of aimless wandering, first toward the city centre, then toward the Tourist Information Office.  During this aimless wandering it’s easy to lose track of the immediate dangers inherent with cycling through busy city streets, which I was reminded of abruptly as I picked myself up from the ground for the second time in a week.

First upended by loose gravel when starting off up a steep incline on one of the many mountains of Slovenia and now as Shurly Anne’s front wheel became entangled in one of the many tram lines of Zagreb’s wonderfully distracting streets.  Still, if you’re going to fall off looking at something, might as well make it something worth photographing – sorry boys, just a building this time. 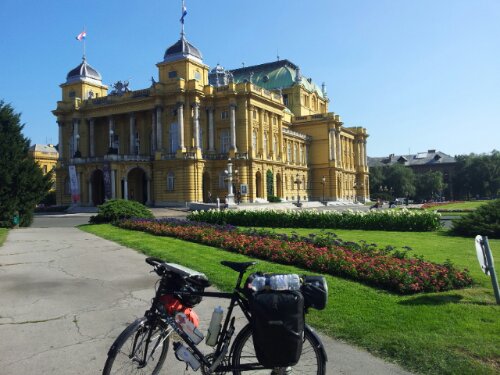 There is some really beautiful buildings in Zagreb

Feeling a little drained from five weeks on the road, a sweltering hot day and an evening spent in a hypersensitive state of fear, I decided to throw the anchor down for the night and workout what to do next.  It was a good move, only time will tell just how good it was.

With all of the hostels marked on my newly acquired map I headed toward a quieter area of the city, discovered earlier when searching for the Tourist Information Office, to look up the nearest hostel there.  Quickly realising although I could see the hostels, I didn’t know where I was in relation to them and none of the street names seemed to correspond with those I could see, or any of the Tourist Information Offices.  There are slight differences between the English map and Croatian street signs, nevertheless, after working that out I still struggled to find the hostels even when cycling up and down the streets they are located on.  It was the third or fourth hostel I went in search of that I eventually found, and the fifth that I actually managed to work out how to get into.  The significance of this was yet unknown.

One night rolled into two, working through the last weekly blog update, enjoying the novelty of a fully equipped kitchen.  Waking on the second morning I was greeted with horrendous rain that didn’t look like it was going to end anytime soon.  A quick look online revealed that most of Central Europe would be enjoying the same for the next five days, there didn’t appear to be a patch of sunlight to aim for in any direction.

When writing the last blog post, I found myself unable to hold back the tears as I reflected back on a tough week and how often I had felt isolated from contact with the people who matter most in my life.  This isn’t unusual for me, I cry most days, usually out of happiness because I can’t quite believe how fortunate I am to be doing something that matters to me so much.  Sometimes, when the going gets tough, I remember an act of kindness from a complete stranger that reaffirms why I set off in the first place.  But these tears were different, these tears were because I missed home and just needed a hug… and there they go again….

This combined with the dreadful weather forecast and being way ahead of schedule, caused me to stop and take an extended breather to regroup, refocus and recharge before cycling on.  Gradually the speed of travel, accumulates into a very rich and intensive experience, usually only enjoyed for shorter periods of time.

With access to a decent wifi connection and time on my hands I managed to speak to Stu, whom has volunteered his time to send out my “updates by email” to subscribers, great news.  I was able to speak to Simon whom I hope to visit in Sydney, Australia next year and almost, Jimmy whom I hope to visit in Turkey in the not too distant future.  ‘The lads’ from home have also been on hand to brighten my mood and make me laugh out loud in the common areas of the hostel, to the bemused on look of the other, ever changing, line up of guests.  Comments on Facebook, the blog and tweets from Twitterers never fail to reaffirm a temporary lapse in focus.

I spoke to Jane, my sister and it was at the end of our conversation that I became aware of a chap walking into the reception of the hostel, followed by a film crew.  Mentioning it to Jane, we joked about getting on TV and how it would help raise awareness of my quest.

And An Incredible Meeting Of Chance?

Hanging up with a lump in my throat and a quivery voice, Leon, who was waiting for the receptionist to return, asked if I was English, to which I replied, “no, I’m Scottish.”  He mimicked my accent and we exchanged banter over Rangers and Celtic, quickly establishing a friendly rapport.  I asked him what they were up to and he explained he was travelling around the world on a vintage motor cycle (Kindness One), relying purely on the kindness of others to get from Los Angeles to Los Angeles, via the world.

What are the chances of two independently organised and entirely unrelated world tours by bike, crossing paths?  Absolutely incredible.  There are a lot of hostels in Zagreb, itself a massive metropolis that sprawls for miles.  Not to mention we started from differnt parts of the world, travelling at different speeds, in different directions and somehow, I happened to be in the reception of the very accommodating Brit Hostel, at the same time Leon happened to walk in.

We both recognised this was a very extraordinary meeting of chance?  And were keen to find out more about each others adventure.  Leon is a seasoned adventurer and is filming his challenge to form a thirteen part TV series for release sometime in the summer of next year and wanted to talk to me about my adventure for inclusion in the show.  Duly agreeing to be filmed, after spending much of the week busily trying to raise the impact of this blog, I couldn’t quite believe what was happening.

The chat we had was a bizarre experience for both of us, it became clear our reasons for going out into the world for challenge and adventure were driven by similar motives; to find out what we are capable of and to do something more meaningful with our lives.  Ultimately seeking life affirming experiences along the way.  To find out more about Leon’s life affirming adventure you can visit his website, www.kindnessone.com.  Leon also writes about his adventures for the LA Times and I hope to be mentioned in his next article which should go live this weekend.

An extraordinary meeting of chance, Leon Logothetis plus crew and I

Throughout this journey, to my delight, I have been constantly reminded that my belief in a very real relationship between what you focus your mind on and what becomes your reality, really does exist.  So focus only on what you want and be careful what you wish for.

I hit the road again on Saturday, after what I’ve just written I think I’ll rephrase that….

I start cycling towards Serbia on Saturday, upright on two wheels at all times, with a strong wind pushing me along at high speed.

In truth, I can’t wait to get moving again and with the additional motivation of cuddles from Mum and Dad waiting on arrival into Istanbul, the next 900 miles will herald a bumper reward.  Only Croatia, Serbia and Bulgaria wait between to test my grit, as the lands become less and less familiar, I can’t help thinking brand new experiences abound.

← Slovenia - Beauty and the Beast Overcoming Overwhelm by Cycling Along in Croatia, Bosnia and Serbia →