Knowing When To Stop, And When To Push On

Looking out across Erzurum from a castle wall

Erzurum sat on a steep incline and was surrounded by snow covered mountains. Life in Erzurum, like most of the villages, towns and cities in this part of Turkey, resembled the wintery conditions; cold and harsh. The people, in contrast, were warm and friendly.

Looking across Erzurum in the opposite direction.

Twelve days of the toughest cycling so far paled into insignificance against the remaining feat of attaining an Iranian Visa. More specifically, of finding the Irainian Embassy which, following a three hour search, I eventually arrived upon with the aid of a Police escort. The process thereafter went very smoothly, and, twenty-four hours later, I returned 180 Euro’s lighter to collect my Visa, elated that the journey had not been in vain. 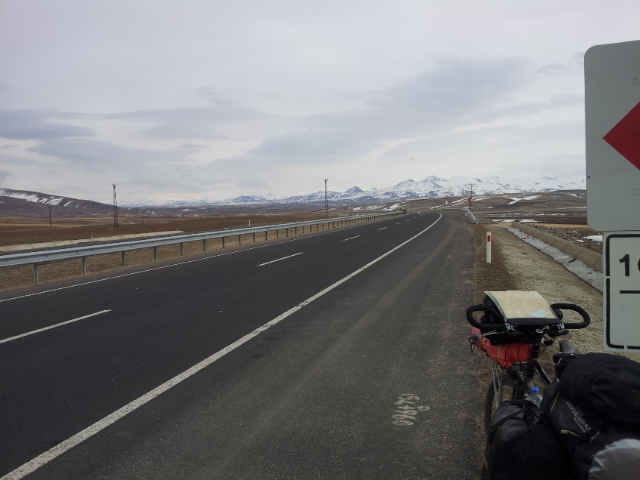 The long flat road to Horasan was a welcome change to the weeks of climbing.

The weather had been kind on route to Erzurum; unusually warm for the time of year with mostly clear skies. During my stay the weather deteriorated, with sleet, snow and falling temperatures making the 255 miles between Erzurum and Van very cold and often wet. Although bitterly cold, to my delight the road to Horasan flattened five miles outside of Erzurum allowing fast, emphatic progress. A rare treat indeed. 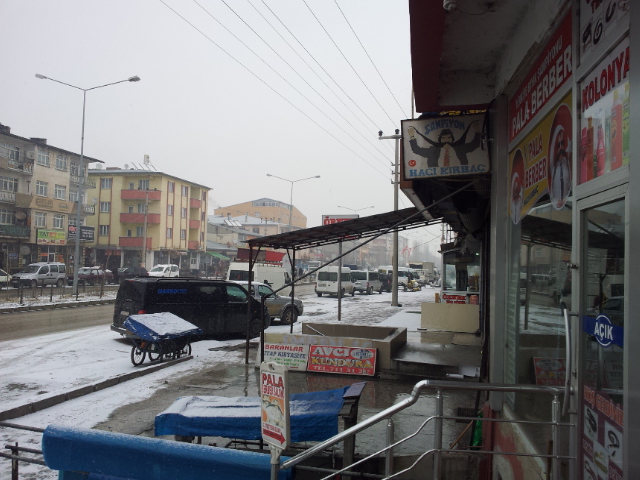 It is not clear from the picture but it was tipping it down with sleet. An uninviting scene to start the day. The chap in the sign holding his massive moustache did brighten the mood.

Sadly, the next day was met with heavy sleet and a twenty mile climb up to Saç Daği Geçidi, 2210 meters above sea level. I lacked energy all day, and there was nowhere to refuel until reaching my planned stop at Eleşkirt. I felt weary when I arrived, unable to let the stares, whistles and jeers bounce off me with my normal resolute smile. What you feel on the inside is projected onto the outside, and my inner torment reflected back as a perception of persecution. People walked the streets in the middle of the road with little awareness of the traffic, and one group of blokes seemed to walk towards me as I adjusted my direction away from them. At low speeds Surly and I are a little clumsy, and the front wheel moves from side to side to maintain balance. This may have been perceived as a deliberate attempt to provoke the group, and one of them kicked my pannier as I passed through them. It was an odd encounter. Soaking wet and freezing cold, I cycled on to the only hotel, which was also a petrol station. It was more of a petrol station than a hotel. Only a ‘hotel’ in the loosest sense of the word; they took money in exchange for a place to sleep. There was no shower, little heating, and the bed sheets hadn’t been changed (ever?). It was a truly miserable day. 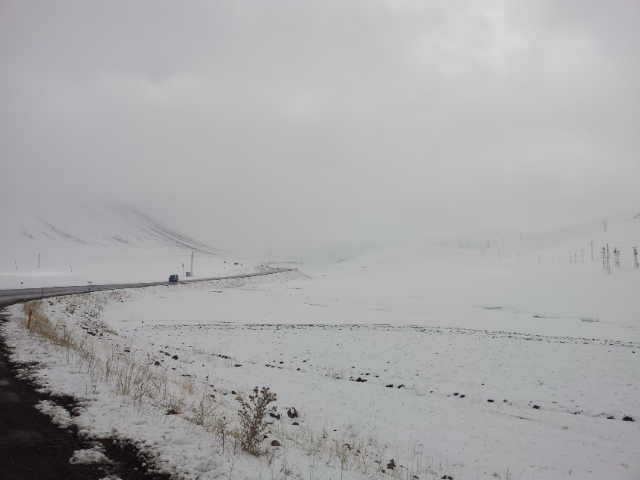 White out after leaving Horasan. 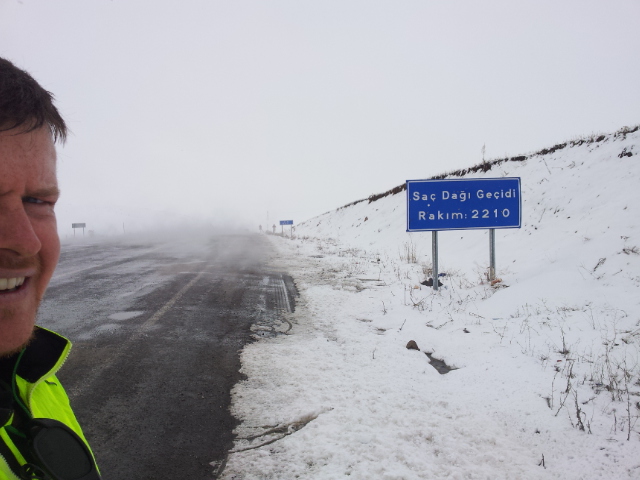 Finally at the summit after hours of climbing in miserable conditions. The steam in the background is created by the heated roads. The extent of the network of heated roads is impressive.

Waking early the next day, I set my sights on Patnos, seventy miles further on. The cloud cover had cleared overnight revealing a straight, flat road ahead. It was even colder than the previous two days and when I stopped for a second breakfast in Ağri both water bottles had started to freeze. 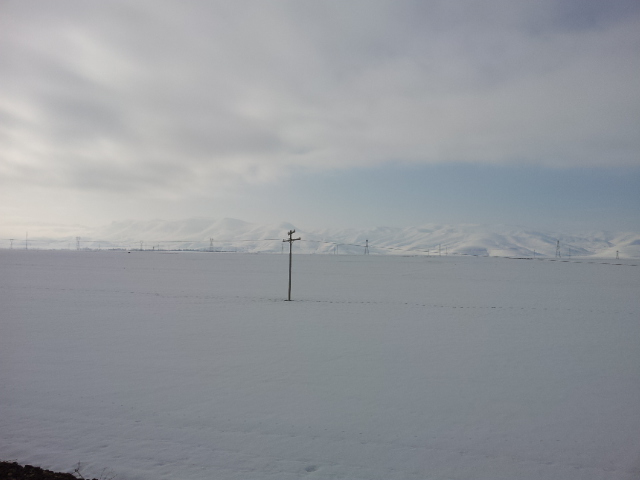 A clearer, freezing cold morning on the way to Ağri.

The road from Ağri to Tutak followed a partially frozen river. After a climb out of Tutak the road flattened, and I was left riding along a solitary black line in otherwise white surroundings.

The frozen river I followed from Ağri to Tutak.

It was a fantastic day, and as Patnos emerged out of the whiteness, I couldn’t resist the urge to cycle on towards Erciş. I’ve never been very good at knowing when to stop, or rather, stopping when I know I should. I have an inbuilt tendency to visit extremes; I remember as a child my Mum saying (in an agitated voice), ‘You go from one extreme to the other, Fraser.’ I would argue black was white one day, only to argue white was black the next. It is a consistent theme, and finding balance and moderation is a constant battle.

With only two and a half hours of sunlight remaining, I estimated I could make it before dark IF I could maintain the average speed of the day AND it was no more than twenty-five miles away. Not unexpectedly, the road began to climb, my average speed dropped, I ran out of light (and energy) which slowed progress further, the temperature plummeted, and it was thirty-four miles to Erciş. A fantastic day’s cycling and a nightmare on a bike; case in point.

Looking across Lake Van from the south-east side.

It took the best part of four hours to reach Erciş. I spent an hour and a half freezing my knackers off in the dark, berating myself for continuing when I could have stopped. Thoughts of being ravaged by a pack of hungry wolves, or being found frozen and capsized by the roadside still stuck to Shurly Anne, nagged away in my mind. It was Baltic, and blowing warm air into my fingers brought only seconds of relief. I had mentally prepared for life without all ten toes. By the time I finally found the only hotel in Erciş I was quite distraught. Once inside, warmed by the inner glow of making it to the other side of discomfort, the cold thawed to reveal a cheeky smile. Pushing on had reduced five days of cycling to four, providing an extra day in Van to prepare for the onward journey to Iran. 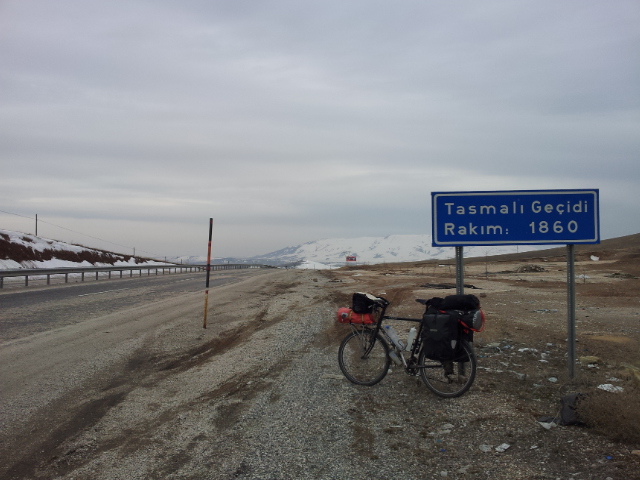 The last significant peak before reaching Van which sits at 1725 meters.

Incredibly, of the seven months I have been travelling, five of them have been spent in Turkey. Visa problems extended my stay initially, and in total I was stationary for over three months. Of the five thousand miles cycled so far, almost two and a half thousand of them have been in Turkey. It is a vast country, the land is challenging, and its people are inspiring. It is a country after my own heart; of extremes. It is with a heavy heart and even heavier thighs that I depart; stronger, fuller and with more faith in humanity than when I arrived. Thanks for having me Turkey, you did yourself proud.

Knowing when or where to stop is very much an individual choice; stopping when it is comfortable feels good at the time, when pushing on is uncertain. When staying comfortable no longer feels good, push on into whatever makes you feel uncertain.

This may be the last post for a month or so; next stop, Iran…..

← Being Vulnerable, Having Faith, And Making Friends - Osmaniye To Erzurum Iran By Bicycle - Part 1 →