Looking back on Mumbai, I won’t be bathing in any Indian rivers.

The flight to Mumbai was very pleasant. Somehow I had managed to slip through several on-flight baggage checks to avoid 160 pounds worth of excess baggage charges. The excess of the charges themselves were enough for me to chance my arm, and it worked (kind of).

As pleasant as the flight was, thoughts, fears and trepidation surfaced upon arrival. We all have beliefs, expectations and fears about different countries (and everything else) that lie dormant until presented with the prospect of visiting. India aroused beliefs, expectations and fears in me which colluded to manifest certain-death as the only outcome of attempting to cross it by bicycle. That was until I crossed Iran with an equally ludicrous belief that bicycle touring there would be an entirely joyous experience.  Notwithstanding this, fears grip you until you confront them head on.

I had efficiently carried four of seven bags to Chhatrapati Shivaji Airport in Mumbai on board, to find one of three bags checked in was missing; the bag containing the oily bits required to put Shurly back together again. Balls!

The bureaucracy involved in registering my claim, then getting out of the airport and into a taxi, was traumatic; sign that, go there, not there, THERE. You have a television? You need to pay tax. It is not a television, it is a bicycle. Ok, go there instead. Oh for f@&k sake would someone just take me, and my bloody big box, to the hotel, PLEASE!

Disappointed (not to be cycling) but partially relieved, with Shurly strapped to the roof of a dinky, toy taxi, we were dispatched across the streets of Mumbai towards the hotel. Observing the disastrously chaotic disorder of the roads through the windshield of a taxi roused justifiable feelings of trepidation – how on earth would I survive on a bicycle?

Before leaving Dubai, the process of putting Shurly Anne into a bicycle box was classic slap-stick comedy of old; a calamitous disassembly devoid of forethought left Shurly marooned, and bare, but the wrong shape to fit into the box. An equally haphazard reassembly in a confused attempt to get her ‘flight-ready’ left me feeling unworthy of my engineering roots. Opening the box in Mumbai, pierced by the front forks and hub, I was astonished to find Shurly was pissed off, but unbroken. Shurly Anne is invincible, at least one of us is. 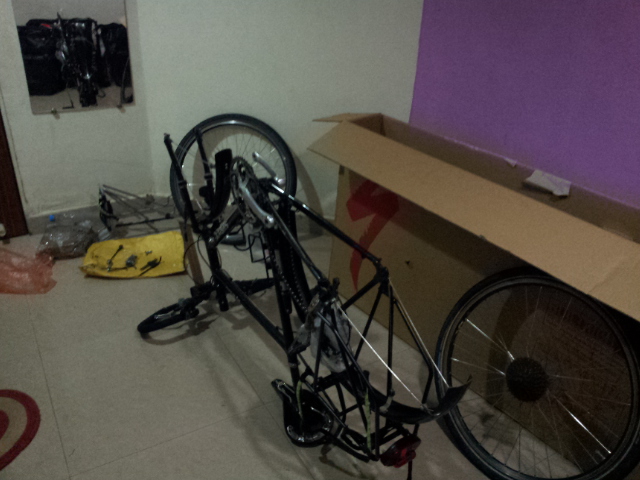 Shurly Anne didn’t enjoy the flight as much as I did. 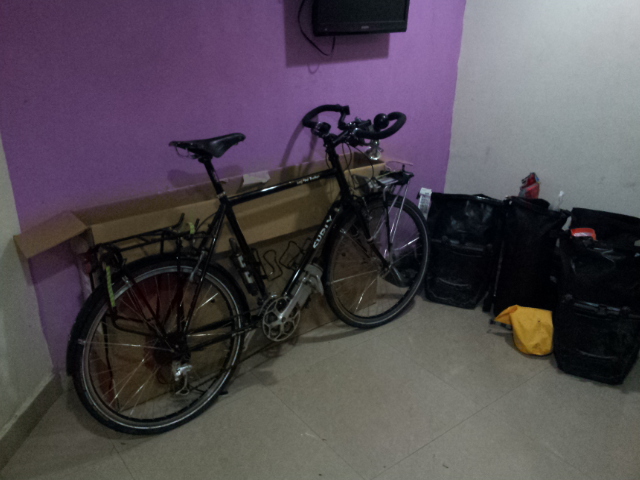 Lost bag recovered and Shurly was feeling herself again.

Of all the countries on route, India conjured up the most fear. The dangerous wildlife of big cats, snakes and spiders fail to register as threats behind the bulging population and their enthusiasm to propel themselves at speed by every means imaginable with little, if any, perceptible ‘rules of the road’ to cast even a shadow of order. Poverty, lack of cleanliness and personal security were lining up to take the baton during food stops and overnight stays.

Walking the streets of Mumbai did little to change my perceptions; a higgledy-piggledy obstacle course over uneven surfaces, dodging incoming people and multi-wheeled vehicles carrying inconceivable loads. ‘IF’ there is a driving test, which is a big ‘IF’, the final pass or fail must rest on the driver’s ability to overload their vehicle to no less than twice the original height and width, then drive it on a timed lap, on or off the pavement, against the flow of traffic, without losing anything. Extra points awarded if they can do it without taking their hand off the horn. 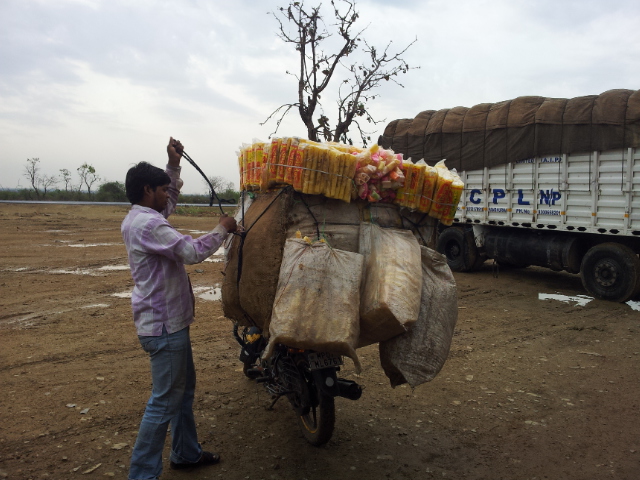 He wasn’t finished there, still room for more on top!

There is no such thing as a relaxing walk around the city. Full attention is required at all times to avoid falling down a cover-less manhole, drainage ditch, or finding your foot has accidentally strayed up a cows arse, which happens to be randomly sprawled out on the floor in front of you. The cows are everywhere, roaming around without a care in the world, a look of nonchalance fixed in place as if to say “Yeah, I know I’m in the middle of the road causing chaos, but I’m a cow, what of it?” 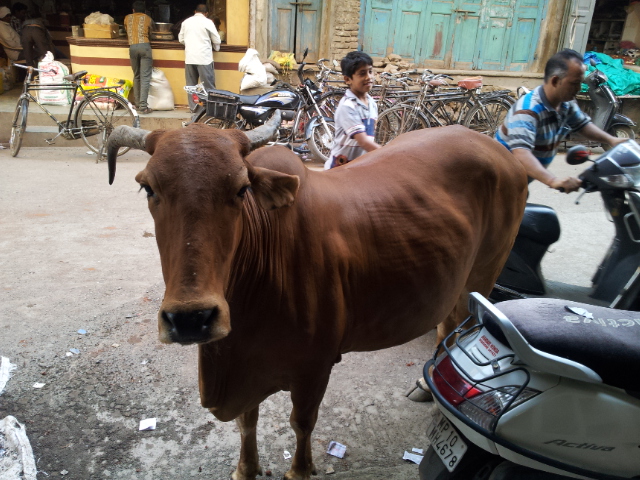 This brute was waiting to greet me on leaving a shop.

The noise is deafening at times, there appears to be an unofficial competition of ‘my-horns-louder-than-yours’ going on, fuelled by a buoyant aftermarket of cock-extending hooters. Scooters have horns that would still seem out of place on an articulated lorry, and lorries have air horns that blast out the audible equivalent of air to ground artillery fire from an Apache helicopter. There have been many times I half expected to be blown-up by approaching horn attack.

Taking to the roads on a bicycle in India is definitely not for the faint hearted, it is a frantic melange of sensory overwhelm. The images received through the eyes are questioned by the brain; did that really just happen? It looked like that overtaking motorcycle disappeared into thin air before colliding head-on with that truck. Was that five people on one motorcycle? Surely the lateral forces of that load would cause that lorry to fall over? Is that two lorries driving down the wrong side of the road, one overtaking the other, heading straight for me? YES!! The ears don’t know what to do, it is just indecipherable noise. The input from the ears is of little use other than to keep you in a heightened state of alert ready to react when the brain accepts the eyes are telling the truth. The nose is besieged with particles of diesel, dust, acrid smoke from burning piles of rubbish, randomly interspersed with the calming aroma of incense, and occasionally the wondrous sent of Indian cuisine. Breathing is difficult, even through the mouth, which gets a taste of everything smelt through the nose.

Then there is the heat. I have arrived in time to spend three months cycling around in temperatures of up to 46 degrees – awesome! Cycling, eating, drinking and sleeping are all secondary to the main activity of the day; sweating. I sweat all day and all night, and short of fitting a water tank with an intravenous dispenser, I spend most of the day dehydrated, unable to keep up with the hydration demands. 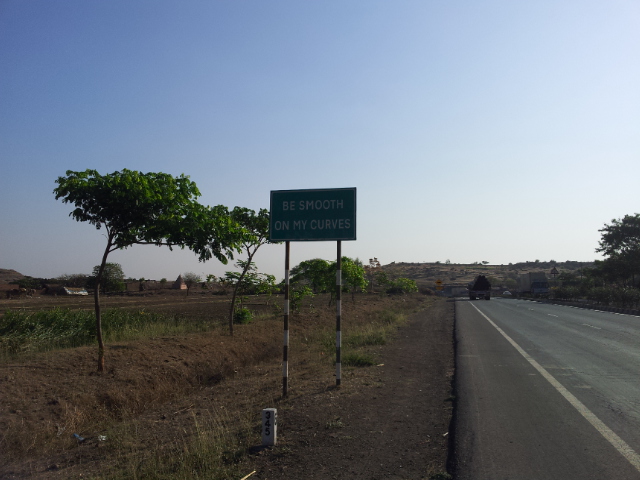 The State of Maharashtra had a particularly philosophical sign writer. I missed one in Mumbai which read, ‘Short cut cut life short.’ 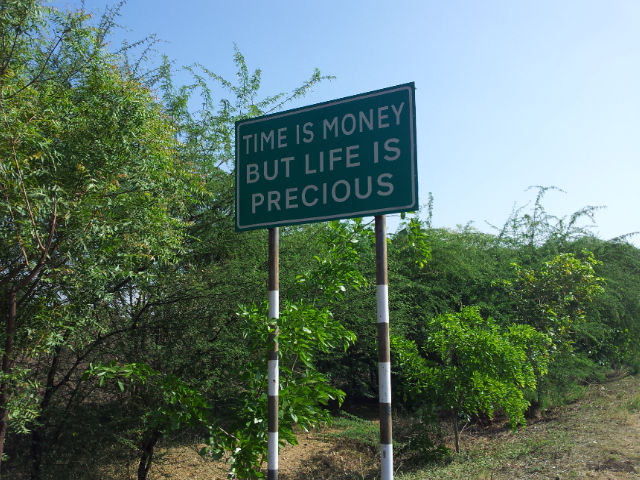 More wisdom from the road. 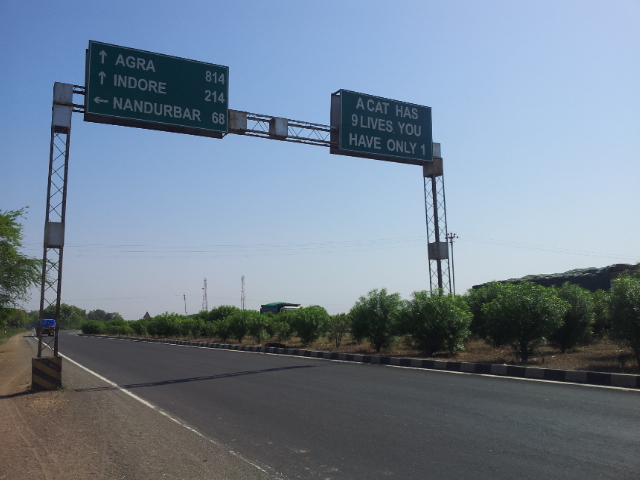 Mingling with the people reveals a happy-go-lucky friendliness and willingness to help which draws you in. Normal caution with vendors should be maintained; after cycling from Mumbai to Shahapur the chance-y hotelier’s first price was 50,000 Rupees (about 50 quid)! To which I responded, turning to leave, “You must be joking, I paid 500 in Mumbai.” “OK, 500” he replied (still too much but there was only one other hotel to choose from). The night ‘watchman’ who I was told would look after Shurly, then proceeded to try and steel two of my water bottles. I got them back, and since then Shurly stays in the hotel room with me or I find somewhere else, which has not yet been necessary. 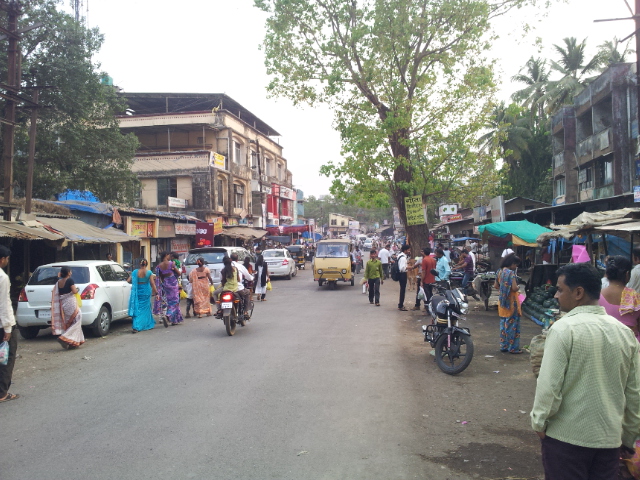 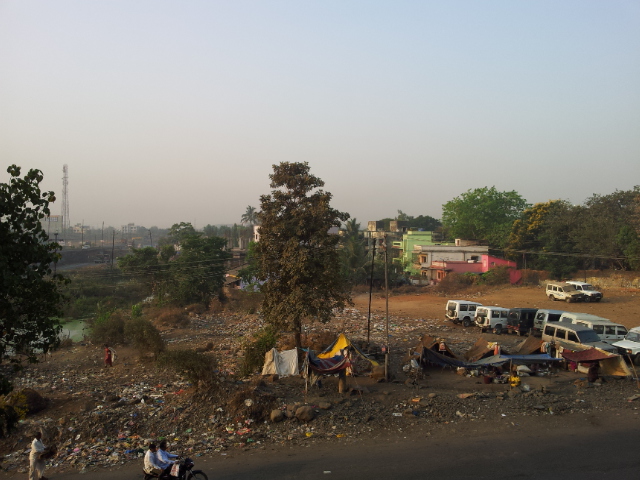 The morning scene from the Hotel in Shahapur; across the street families live in makeshift homes amongst the rubbish. Poverty is never far away.

Wild camping is possible but not advisable. Frankly, trying to save 2 to 6 pounds by sleeping in a tent, risking the loss of Shurly or more, seems ridiculous. Not forgetting, in the heat, it would be like sleeping in a greenhouse.

India is split into 28 states. I’m heading to Dharmsala, in the state of Himachal Prades, which lies in the North West corner of India, in the lap of the Himalayas. Home to the Dalai Lama’s headquarters, it is a spiritual centre, and it is my intention to continue my own spiritual journey there. More on that another time though.

From Shahapur I cycled north through Nashik to Chandwad where I had an interesting evening with a couple of young chaps who helped me find a place to stay. As a thank you, I offered to take them for something to eat. It didn’t quite go as I had envisioned and I found myself three up on a motorcycle heading down the road at night, being filmed and photographed by three more friends riding on a second motorcycle. For most of the journey I was definitely the only one paying any attention to the road ahead. I imagined that at least there would have been a detailed photographic record of how the six of us had met our demise, as they picked our remains from the grill of an overloaded lorry. Thanks chaps for all your help, I had a good time really! 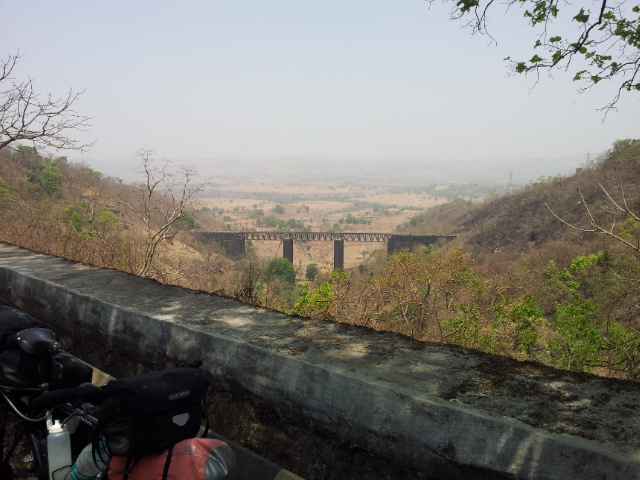 The road to Nashik took in a decent climb to reach a vast plateau.

From Chandwad through Dule and Sendhwa, I had my first 100 mile day in 38 degree heat to reach Indore, where I took an extra day to write and rehydrate. 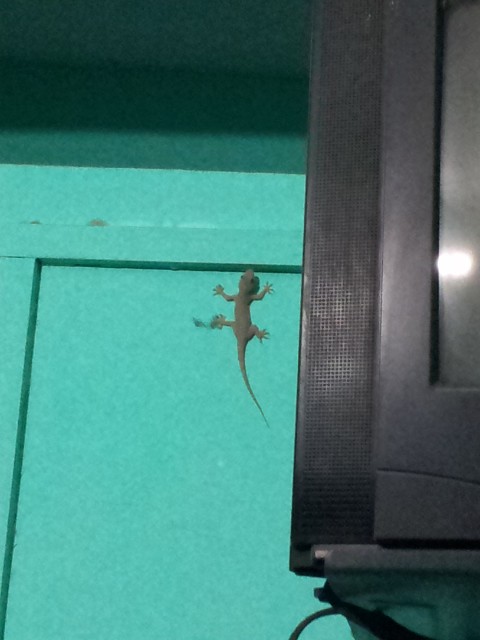 A little Gekko shared my room in Dhule, much better company than the cockroaches in Mumbai.

The trepidation and fears are still there, now in rational context; India is chaotic and dangerous, but somehow it works, and each day brings an exciting adventure I definitely wouldn’t want to miss. 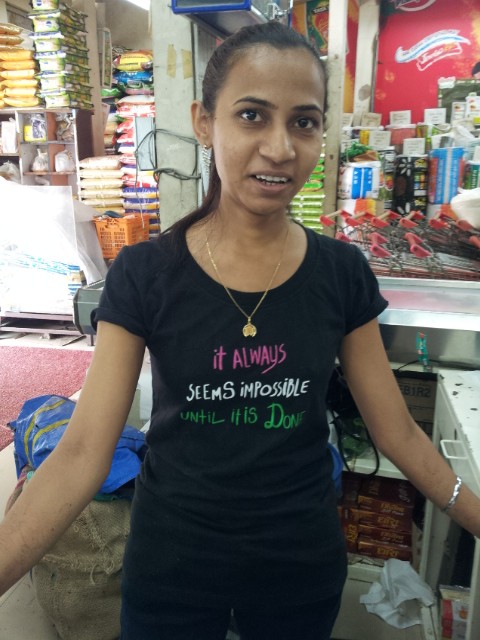 It always seems impossible until it is done. Agreed.

← Bicycle Touring In Iran - Part 3 Judgement, Non-judgement And A Dose Of The Runs →