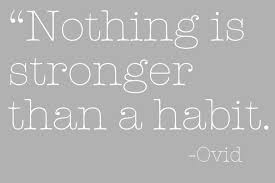 Last week we looked at how to set goals you will actually achieve by taking a detailed look at what you want to do, be, and have, in each area of life. The objective was to create very specific goals, stated positively in the present tense, with a date in the future the goal would be achieved. We then created a mental picture of the achievement of the goal to program our unconscious minds to focus on making it a reality.

Today’s post outlines the process of taking those goal statements and turning them into habits that will form part of your daily rituals. This is a brief summary of what the process entails, taken from the section of my new book titled; Cyclehacking – Do. Learn. Evolve. This is the largest section of the book, and digs deep into why we form cycles of behaviour and how to change them.

In Charles Duhigg’s enlightening book, The Power Of Habit, he reveals, through in-depth scientific research (studying the brains of individuals that had managed to break habitual behaviours like smoking, over eating and substance abuse), that the day-to-day choices we appear to make as a result of consciously considered decisions are actually the by-product of well-established habits. They discovered that the neural pathways responsible for the old behaviours were still active, however, new neural pathways were literally re-routing around the old pathways to produce new behaviours, which themselves had become habitual.

If you think about your own life and consider what you did when you woke this morning, did you get up and go to the bathroom first, or to the kitchen for breakfast? Or maybe just a cup of tea, coffee, water, or juice? Did you brush your teeth before, after or whilst in the shower? Did you put your left or right shoe on first? All of these things happen as a result of habit, well-worn neural pathways in our brains.

There are four components which represent a habit; the cue or trigger, the routine or behaviour, the reward or outcome and the craving, the itch we need to scratch.

Using smoking as an example, the cue is the stimulus from the environment which lights-up the neural pathway; this could be seeing a packet of cigarettes, smelling cigarette smoke, etc. This triggers the craving for nicotine which drives the behaviour; smoking a cigarette, in turn, providing the reward of a satisfied nicotine craving. Nicotine is an addictive substance and withdrawal symptoms act as a trigger and a craving, however, nicotine leaves the body in approximately 48 hours. If it was only withdrawal symptoms from the nicotine that caused people to continue smoking, it would also be true that smokers could stop smoking by simply abstaining for 48 hours. Anyone who has stopped smoking for 48 hours will tell you the cravings don’t stop there, it is the many other cues in the environment that continue to trigger the craving.

In addition to this, the researchers discovered that certain habits, referred to as ‘keystone habits’, when altered or changed, create a ripple, which affects habits in other areas of the individual’s life.

Using Actions And Behaviours To Achieve Your Goals

To stand the best chance of achieving our goals we need to approach them in two distinct ways; decide on which actions we need to take, and turn the completion of those actions into habitual behaviours.

We are bombarded through the media with sensationalised stories of how people became overnight successes. Companies selling products in every market sector focus on creating remarkable results in ridiculously short time frames. Unconsciously though, these stories set us up for failure when we embark on our own goals. When we start working toward a goal we typically expect to see (often immediately) positive effects from our actions in unrealistic time frames, and we attempt to change too many things at once.

Shifting our focus from reaching the outcome quickly to practicing a behaviour consistently will make achieving our goals habitual. Because changes in our behaviour in one area of life ripple across all others, we only need to focus on one goal at a time to have a far reaching impact on everything we do.

What Is The Very Next Step?

Work on the goal that will create the biggest ripple affect across all other areas of life first. If you need to improve your exercise regime this is a great place to start. Research shows that making exercise a habit positively impacts every other area of life. It release endorphins which make you feel good, produces dopamine and serotonin which make you more alert, positive, more creative, able to see opportunities clearly, overcome problems, reduces stress and make you less susceptible to illness, to name a few. If you are already happy with your exercise routine, or there is another area of life you feel compelled to work on, pick that one.

Think broadly about the tasks you need to complete to get from where you are to where you want to be. If you know of someone who has achieved what you want, find out how they did it. If that isn’t possible, think about the end result you want to achieve and work backwards to today, making note of the task you need to complete along the way. Keep working back until you get to the very next step you need to take. This is your first action plan, if you like. Remember; between where you are and where you want to go, the plan will change as a result of the action you take; do not stress about working out every detail.

Work out your next step and do it.

Aligning Habits To Support Your Goals

With this behaviour identify what the cue is that triggers the behaviour, what the reward is you get from the behaviour, and what the craving is that motivates you to behave in that way. This is a learning process; spend a few days just observing yourself running the habit loop, in order to become familiar with each of the components. To change the outcome of the habit loop you need to use the same cue and associate it with the new behaviour you want.

I used this process to stop smoking after years of failed attempts. When smoking twenty cigarettes a day the cues in the environment were all around me, as you might imagine. My craving for nicotine motivated the behaviour of smoking, which was rewarded by satisfying my craving. All I did was replace the behaviour of smoking a cigarette with sucking on a nicotine inhaler instead. I was determined to stop, and made the habit easy to form by committing to use the inhaler when I experienced a cue, before smoking a cigarette. After using the inhaler, I had satisfied my craving and received the reward, and no longer wanted to smoke the cigarette. I made a conscious decision only to use the inhaler if necessary, and decided never to smoke a cigarette again. Over the course of two months I stopped using the inhaler altogether, and over two and a half years later I have remained totally free from cigarette smoke.

Learn from each step you take toward your goal, and feed the learning back in to guide what action you take next. In the most part, getting what you want is just a series of good choices about where to focus your time and energy. These decisions are little things that seem insignificant on any given day; choosing fast food or ready meals over a healthy meal, sitting idle in front of the TV instead of exercising for thirty minutes, smoking a cigarette, etc, because they are insignificant. Doing those things once bears no significant consequence; multiply them by time, however, and the difference between making good choices and poor judgements leads to entirely different lives. The dichotomy is that making good choices is incredibly easy to do and incredibly easy not to do. Make making good choices a habit. By paying attention to the habits that are creating your outcomes, and replacing the behaviours with those that support the achievement of your goals, day after day you will move closer to getting what you want.