To Live Is To Struggle – What Are You Struggling For?

The entrance to the Royal Palace, Phnom Pehn.

Looking back over the last sixteen months on the road, one aspect of using a bicycle to travel 12,600 miles through twenty-one countries stands out above all others: struggle. In a world where we are constantly marketed products and services to make our lives easier, pursuing a life of consistent physical and mental struggle seems completely counterintuitive, which of course it is. But does living a life made easy really offer fulfillment? 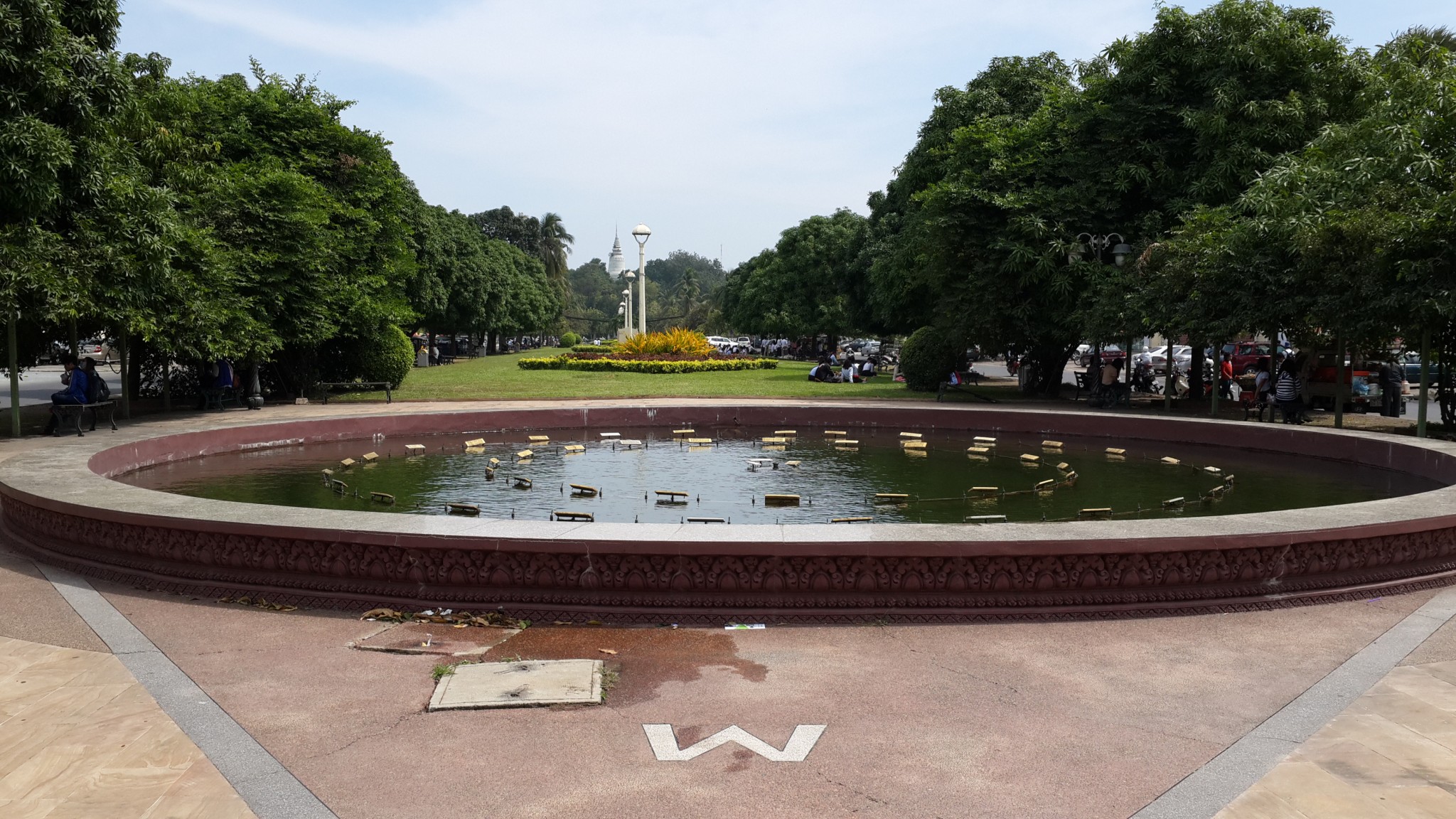 The approach to Wat Phnom, which is just visable in the background. Wat Phnom is a Buddhist temple built in 1373.

I was listening to one of my favorite podcasts earlier this week hosted by a chap called Rich Roll. Rich Roll is a plant based Ultra-athlete, wellness advocate, best selling author and podcast host. His story is inspiring and particularly resonates with me. His first book, Finding Ultra – Rejecting Middle Age, Becoming One of the World’s Fittest Men, and Discovering Myself, shares how he went from being a promising college swimmer to an unfulfilled alcoholic lawyer. He eventually overcame his addiction to become an ultra-athlete competing in the inconceivably grueling Ultraman Triathlon: a double triathlon which starts with a twelve mile swim and ends with a fifty-two mile run, oh, with a one-hundred and eighty mile bike ride in between – nice! He then went on to push the boundaries of human endurance with his attempt to complete the Hawaii Five in Five: five full length triathlons (six mile swim, ninety miles on the bike, twenty-six mile run) in five days, you’ll have to read his book to find out what happened.

Each week he ‘delves deep into all things wellness with some of the brightest and most forward thinking, paradigm busting minds in health, fitness, nutrition, creativity, entrepreneurship & spirituality — including world-class athletes, doctors, nutritionists, authors, entrepreneurs, spiritualists & artists. Topics include: general fitness & endurance, ultra-endurance multi-sport training, vegan / plant-based nutrition, meditation, yoga, spiritual philosophy, sustainable lifestyle and beyond. Rich’s goal is simple: to educate, inspire and empower YOU to discover, unlock & unleash your best, most authentic self’. (Description from itunes.)

His guest this week was Dean Karnazes and their discussion inspired this post. I read Dean’s first book, Ultramarathon Man – Confessions of an All-Night Runner, back in 2009 and it totally rewired my beliefs about what was humanly possible. Like Rich, Dean also reached a point when he had accomplished everything that modern society labels as ‘being successful,’ yet felt completely unfulfilled. On the evening of his 30th Birthday party he decided in his drunken state to go for a run. Thirty miles later he called his wife to pick him up, he had reignited the passion he had for running in his youth, and his journey to be named one of the fittest men on the planet by Men’s Fitness had begun. Dean’s achievements in running since that night are truly mind blowing, here are just a few:

(lifted from the podcast summary on RichRoll.com click the link to listen to the show.)

It can be overwhelming to look at what Rich and Dean have achieved and adopt the belief that they are genetically gifted and there’s no way you could do what they have. What the headline achievements don’t show, however, is the journey they each went on to write them. Their journeys started with a decision to make a change, to stop living a life they found dissatisfying. They decided to pursue endurance sport because it challenged them and gave them a sense of fulfillment, but the road from lawyer and businessman to endurance athletes was tarmac’d in STRUGGLE.

The training regimes for ultra-athletes is punishing due the shear volume of miles required to condition the body for race day. Fitting the miles in around a full time job and family is a serious commitment. So why do it? During the conversation they discuss that to struggle is to be alive, meaning all personal growth, learning and development is a by product of struggling towards a worthy goal.   I agree with this but also believe that to live is to struggle.

In theory, it would have been far easier for them to maintain the status quo, however, waking up to the feeling of dissatisfaction day after day, week after week, year after year is really just another form of struggle. The destructive form.

The shift in belief brought about by learning of Dean’s running achievements back in 2009 caused me to question what I had been telling myself about what I was capable of, and less than a year later I completed my first marathon. What a struggle it was too, a six hour debacle, I only just made it before the race organizers packed away the finish line! My time, which was so important before the race, was irrelevant. The satisfaction of finishing at all was overwhelming. Months of struggling through ever longer training runs and self deprecating doubt, were over. As I crossed the finish line they were replaced with pride and a much needed boost to my self esteem.

It’s kind of embarrassing to talk of my running efforts in the shadow of Rich and Dean’s mind bending feats, but the point is you have to start from where you are at. In the end, completing the marathon wasn’t about running 26.2 miles. At a time when I had racked up failures in my work life, health and relationships, it was about proving to myself that I could achieve something way outside of my comfort zone. That marathon was a turning point. Through the struggle started a tentative, wobbly, more positive streak which eventually led to the cycle around the world I find myself on now. 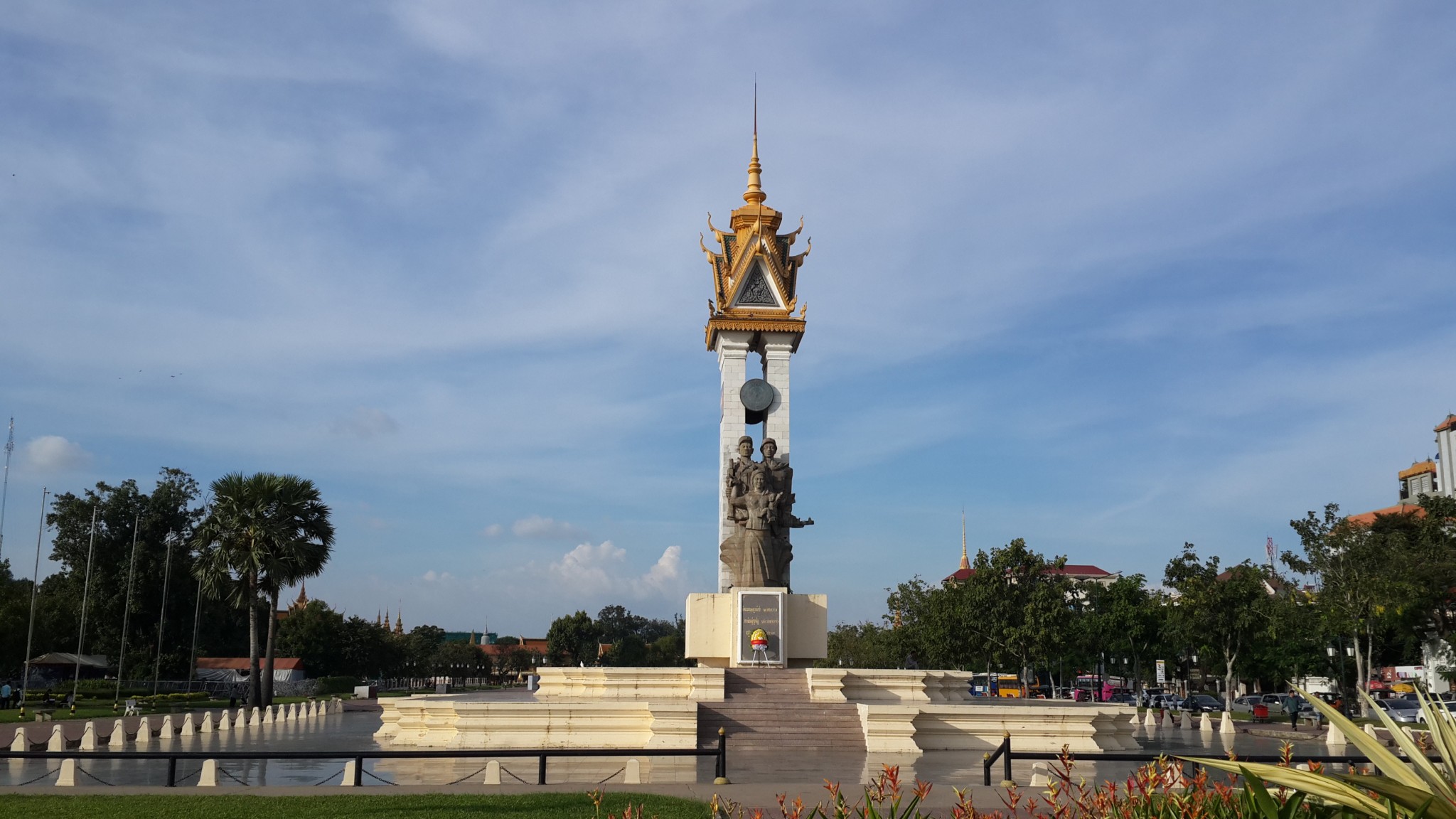 The Wat Botum Park monument celebrating the fall of the Khmer Rouge.

The first 12,600 miles have been a glorious struggle through which I’ve experienced the highest of highs and lowest of lows, often on the same day! I don’t think anyone enjoys struggling because by it’s nature it’s uncomfortable, painful even. The problem is that to live is to struggle, an ‘easy life’ befits the fallacy of comfort and ultimately leads to discomfort, to struggle. All the sadness, dissatisfaction, discontent and frustration, all the learning, all the growth and fulfillment, are on the other side of struggle.